The big news was the revolutionary iPhone X, which eliminates the Home button and unlocks by recognizing your face. Apple also announced the evolutionary iPhone 8 and iPhone 8 Plus; a cellular-capable Apple Watch Series 3; and the Apple TV 4K, which supports 4K HDR video. The company said that iOS 11 and watchOS 4 would ship on September 19th, and later noted that macOS 10.13 High Sierra would arrive September 25th.

Rather than calling the new model the iPhone 7s, Apple jumped to the iPhone 8 name to acknowledge significant hardware changes, notably a mostly glass case designed to allow wireless charging. Otherwise, the iPhone 8 and iPhone 8 Plus largely follow in the footsteps of the iPhone 7 and 7 Plus, featuring the same 4.7-inch and 5.5-inch screens, respectively. Theyâ€™re almost the same size as the previous models, varying only by fractions of a millimeter in different dimensions, and are water and dust resistant too.

Although the iPhone 8 models still sport a Lightning port (and come with a headphone jack adapter), youâ€™ll charge them by setting them on a charging pad based on the Qi wireless charging standard (Qi is pronounced â€œcheeâ€). Furniture retailer IKEA has even built such chargers into some of its tables. In 2018, Apple plans to release an AirPower charging mat that will charge an iPhone 8 or iPhone X, Apple Watch Series 3, and AirPods with a new charging caseâ€”all with no cables.

The iPhone 8 and 8 Plus screens now support Appleâ€™s True Tone technology, which changes brightness and color based on the ambient light. Plus, their stereo speakers are 25% louder than in the iPhone 7 and have deeper bass.

Under the hood, the iPhone 8 models include a new A11 Bionic chip that Apple claims is the most powerful chip ever in a smartphone. The chipâ€™s performance will particularly benefit games; apps that rely on machine learning; and apps using augmented reality, which can seamlessly place virtual objects in live video of the real world.

Although the basic rear-facing camera in the iPhone 8 is still 12 megapixels, it uses an all-new sensor that captures 83% more light and provides deeper pixels, a new color filter, and optical image stabilization, all while using less power. That adds up to pictures with better color saturation, a wider dynamic range, and lower noise.

Like the iPhone 7 Plus, the iPhone 8 Plus sports dual 12-megapixel rear-facing cameras, one with an Æ’/1.8 aperture and the other at Æ’/2.8. Those cameras have the same new sensor, and iPhone 8 Plus owners will be able to try a beta of Appleâ€™s new Portrait Lighting feature, which lets you apply studio-quality lighting to your scene as you compose the shot. You can even change the lighting afterward.

Both iPhone models boast improved video capture as well, in part due to a new image signal processor that provides faster autofocus in low light conditions. You can now shoot 4K video at 24, 30, or 60 frames per second, up from just 24 fps in the iPhone 7. And, you can capture slo-mo video in 1080p resolution at 120 or 240 fps, whereas the iPhone 7 was limited to 120 fps.

The iPhone 8 costs $699 for a 64 GB model and $849 for a 256 GB model. Available colors are gold, silver, and space gray. Add $100 to either price for the iPhone 8 Plus. Apple will begin taking pre-orders on September 15th, with general availability a week later.

If those prices are a bit steep for you, Apple continues to sell the iPhone 7 and 7 Plus, the iPhone 6s and 6s Plus, and the iPhone SE starting at $349.

The iPhone 8 may be a small step up from the iPhone 7, but the new iPhone X is a giant leap into the future, setting the standard for the smartphone of tomorrow. Pronounced â€œiPhone Ten,â€ Appleâ€™s new flagship iPhone boasts a stunning, edge-to-edge screen that fills almost the entire front face and eliminates the Home button. It shares the iPhone 8â€™s glass back and support for wireless charging.

With no Home button, youâ€™ll interact with the iPhone X in different ways. You can wake an iPhone X with the Raise to Wake setting or by tapping on its screen. You invoke Siri with â€œHey, Siriâ€ or by pressing the new side button. To unlock the iPhone X, you swipe up from the bottom of the screen while looking at the iPhone X, and it uses Appleâ€™s new Face ID technology to recognize your face, much like Touch ID did with your fingerprint in the past. Swiping up from the bottom of the iPhone X screen works across the system for jumping back to the Home screen or (if you pause briefly) opening the app switcher.

Face ID seems like magic, but it relies on the TrueDepth front-facing camera systemâ€”that notch on the top of the screenâ€”which includes a 7-megapixel camera, infrared camera, flood illuminator, dot projector, and more. Face ID can recognize your face even in the dark, and it continually adapts to your changing look, so it can handle glasses, hats, beards, and more, all without being fooled by a photo of your face.

Like the iPhone 8 Plus, the iPhone X sports a pair of rear-facing cameras, but with slightly different specs. One has an Æ’/1.8 aperture, but the other is Æ’/2.4, as opposed to f/2.8 on the iPhone 8 Plus, and lets in 36 percent more light. The iPhone X also offers dual optical stabilization (on both lenses) for better low-light photos and videos.

All this technology doesnâ€™t come cheapâ€”a 64 GB model costs $999, and a 256 GB model is $1149. You can choose between silver and space gray. Regardless, youâ€™ll have to wait a bit longer for the iPhone X because Apple plans to start taking orders on October 27th, with general availability on November 3rd.

The original Apple Watch couldnâ€™t do much more than tell time when separated from its companion iPhone. The Apple Watch Series 2 gained a GPS to track your location on its own when you were running or biking. But now the Apple Watch Series 3 includes a cellular chip that allows it to make phone calls, get messages, use Siri, stream tunes from Apple Music to AirPods, and more all while your iPhone sits safely at home. It uses the same phone number but will cost an extra $10 per month from your carrier.

To make untethered communication possible, Apple built the cellular antenna into the display and developed a special electronic SIM thatâ€™s about one-hundredth the size of an iPhoneâ€™s nano SIM. The Series 3 also boasts a faster processor that speeds up app performance and allows Siri to talk back you, along with a barometric altimeter to measure relative elevation.

Amazingly, the Series 3 case is the same size as the Series 2, although the back crystal is a hair thicker. Battery life in mixed use remains at up to 18 hours, though youâ€™ll get only an hour of battery life when making phone calls.

The Apple Watch Series 3 has an aluminum body in three finishes: gold, silver, and space gray. For a different look (and potentially a lot more money), you can get Nike+ aluminum models, HermÃ¨s stainless steel models, and Apple Watch Edition ceramic models. Apple is also now offering a new Sport Loop band thatâ€™s meant to be light, stretchable, and breathable.

You can pick from two Series 3 models: one with just a GPS chip like the Series 2 for $329 and one with both GPS and cellular capabilities for $399. Pre-orders start September 15th, with general availability on September 22nd. Apple no longer sells the Series 2 but has dropped the price of a Series 1 to $249.

Appleâ€™s set-top box hasnâ€™t seen many changes of late, which makes the new Apple TV 4K all the more welcome for video buffs. The new device now supports two key video technologies: 4K and HDR. 4K video provides about four times as many pixels as are in 1080p video, and HDR (High Dynamic Range) supports more colors. The result is video that looks fabulous, with more detail, deeper colors, and better contrast than ever before.Â 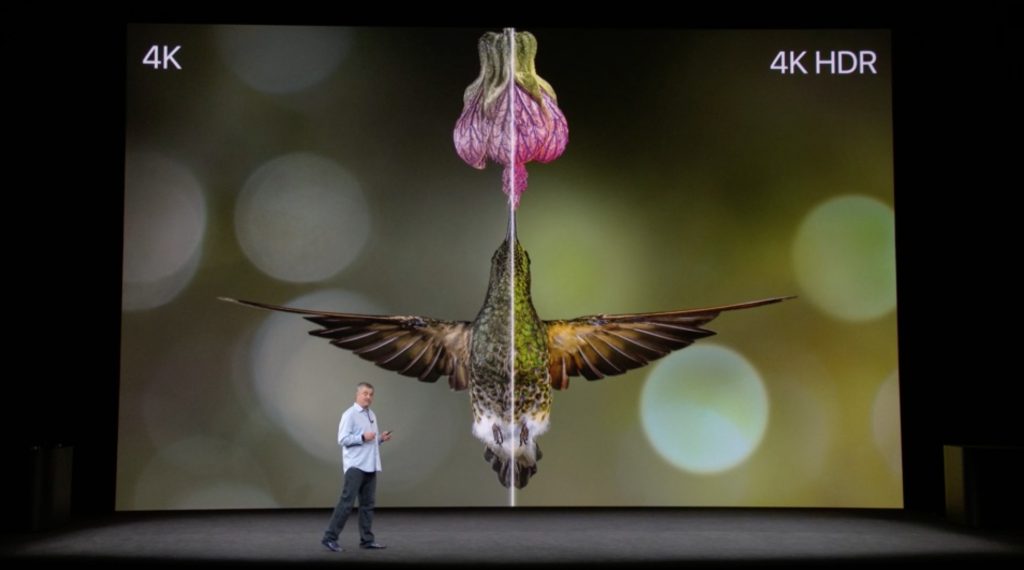 To see all that goodness, youâ€™ll need a 4K TV that supports either the Dolby Vision or HDR10 standardâ€”in other words, unless youâ€™ve bought a TV in the last year or two, youâ€™ll probably need a new one. Check the specs carefully!

The third part of the puzzle, after you have a 4K TV and an Apple TV 4K, is 4K HDR content. Apple is working with major movie studios to bring 4K HDR video content to iTunes at the same price as HD movies. Youâ€™ll even get an automatic upgrade to 4K HDR versions of iTunes HD movies youâ€™ve purchased, when they become available. Netflix 4K HDR streaming is expected immediately, and Amazon Prime Video should offer 4K HDR video on the Apple TV later this year.

A 32 GB model of the Apple TV 4K costs $179, and a 64 GB model is $199 (stick with the smaller model unless you play large Apple TV games). You can pre-order it on September 15, and it will be generally available a week later. The fourth-generation Apple TV remains on sale for $149. Although Apple said nothing about when tvOS 11 would be available, it seems likely to ship with iOS 11 and watchOS 4 on September 19th.

Whew! Thatâ€™s a lot of new hardware from Apple in one day. If youâ€™re considering buying an iPhone, Apple Watch, or Apple TV, you can now choose from new models with tempting features or time-tested older models at reduced prices. And if youâ€™re confused by all the possibilities, feel free to contact us for advice!